I am counting down the hours until the return of Will & Grace on NBC. I already have dinner plans with two friends and we’re going to watch the premiere together. To prepare, I’ve been rewatching the original series on DVD. So, I figured it was a good time to do a ten favorites list, kinda like my A Very Merry Television List from 2015.

I can’t quite bring myself to actually rank these, so I’ll just do them by season (from earliest to latest). Here are my ten favorite Will & Grace episodes from the original 8 seasons.

Season 1, Episode 9: The Truth About Will & Dogs

Okay, well, first of all, if you know me at all you know that I’m a sucker for puppies, and the puppy that Grace tries to convince Will that they should adopt is SO CUTE I CAN HARDLY STAND IT. And come on, Will’s “You had me at hewrow” is just so friggin’ sweet. Plus, it’s got some quality early Jack and Karen banter.

Season 2, Episode 10: Tea and a Total Lack of Sympathy 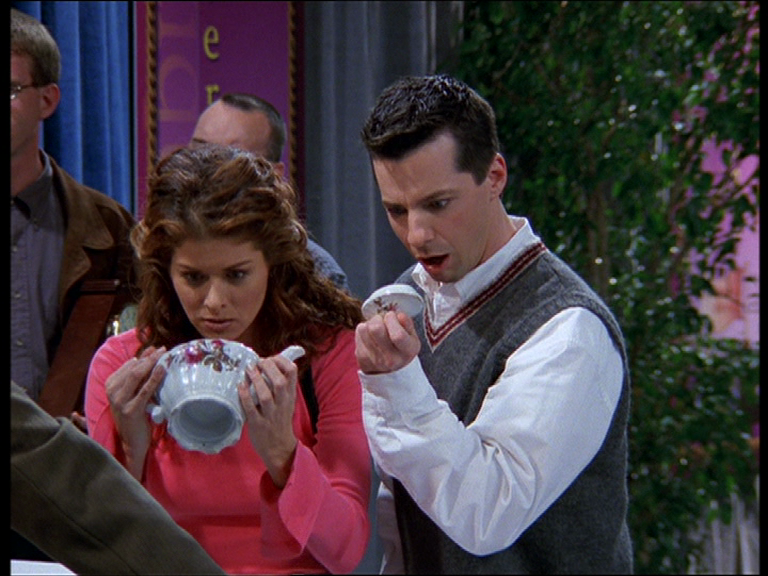 Grace and Jack is actually one of my favorite pairs on this show. They have an interesting comedic chemistry that I don’t think got enough play early on in the series; I hope we see more of them together in the newer seasons. Anyway, this episode features them trying to get on a TV show that’s supposed to be a version of Antiques Roadshow. Meanwhile, Will is trying to get Karen to be his client, and this is also the first time she calls herself Anastasia Beaverhausen.

Favorite Line: “It’s only the best show on television…you know, next to the Creek.” 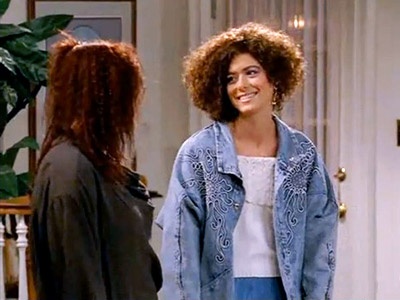 In a flashback Thanksgiving special, Will and Grace and Jack and Karen meet a distraught young woman who inspires them to tell the story of how Will & Grace became Will & Grace. Guest Star Debbie Reynolds is amazing because she was always amazing. I think I’ll miss her most of all when the show returns…anyway… Though the episode is full of humor, it also has some serious and touching moments between Will & Grace, especially as the present day and flashback overlap with one of my favorite moments from all eight season…

Season 4, Episode 1: The Third Wheel Gets the Grace 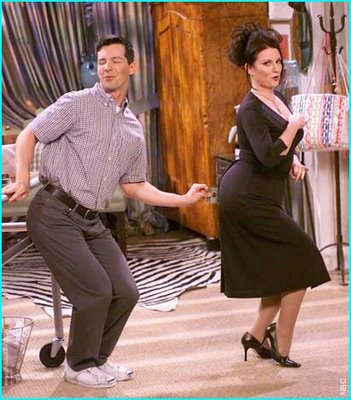 I may be in the minority here, but I LOVED Woody Harrelson on Will & Grace. I don’t know if the show would’ve continued to work if his character (Nathan) and Grace had stayed together, but I really adored him and the chemistry they had together. In this episode, we get to see the struggle Grace repeatedly has between whatever man she’s in a relationship with at the time and her soulmate, Will. This one involves a Barney’s sale. We also see Jack trying to bond with his son, Elliot, and Rosario getting Karen to go shopping with her for their anniversary. Plus, it gave us one of the most famous Jack & Karen scenes that is .gif’d the world over (see above still image).

Favorite Line: “Will. What do you think of this dress?” “It’s fine…Mrs. Flieschman, if you’re going to continue that affair with the superintendent of the school district.” “I am so glad that you’re here.” 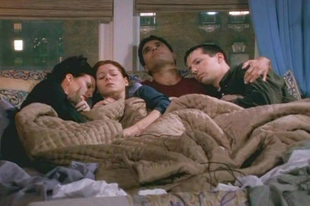 After Grace’s breakup with Nathan, Will, Jack, and Karen try to cheer her up. Much like my favorite episode in Season 3, this is one of the episodes where they swing serious and it works, especially since we get to see how much these four actually care about one another.

Favorite Line: “Look, I’m sorry. I’m not like all of you. Will, Michael left you for another man. He was the love of your life and you have to live every day knowing he’s out there loving someone else. I couldn’t do that; I would die. Karen, your husband is in prison. The rock of your life and you don’t know when he’s coming back. If I were you, I’d be a wreck. And Jack, you’re so resilient. You’re an actor-singer that gets involved in a dozen relationships and doesn’t get emotionally invested in any of them. I wish I could do that, but I can’t. So please, just let me go back to bed and deal with this the only way I know how.” 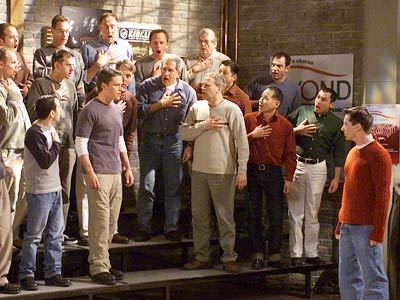 Favorite Line: “I believe she also said, ‘Hey Cuba, Canada, Cowgirl, Crazy, get out of my light and away from my snacks, bitch.'” (close tie for this is the line about the long-term relationship with his high school boyfriend, Ben…) 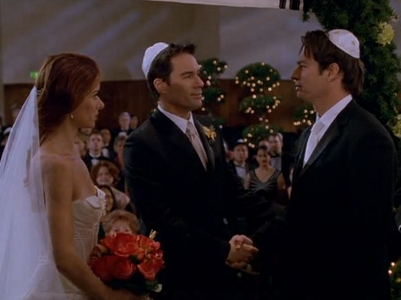 Grace and Leo’s real wedding. I’m a sucker for wedding episodes, but this one has some extra gems in it. Debbie Reynolds, again, being fantastic as Grace’s mom. Sentimental moments from Karen and Jack. And the beautiful rooftop moment between Will & Grace before Will walks Grace down the aisle. After everything these two go through in Season 5, it’s a beautiful reaffirmation of their friendship and shows it will last.

Favorite Line: “Will, I may be getting married today, but when I said I was going to spend the rest of my life with you, I wasn’t wrong.” 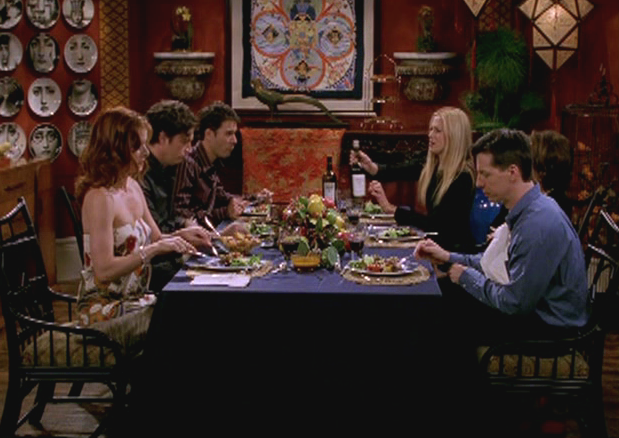 Leo runs into his ex-girlfriend, Diane (played by Mira Sorvino, who is FANTASTIC!), and Grace in an attempt to be the “cool wife” invites her to come over for dinner along with the rest of the gang. Turns out Diane is the only woman Will has ever had sex with. The side story of Jack and Karen is them taking care of a small puppy (I told you I love puppies), but mostly, they’re just there to provide some of the funniest lines they ever give during the entire series. It’s near impossible to pick just one, but if I had to, it’s this one:

Favorite Line: “Silly! Diane is a girl. She doesn’t have kabobs, she has a ka-gina.”

Of all the relationships across all eight seasons of Will & Grace, Will and Vince were my favorite. More later (after Vince’s whole getting fired and them breaking up…), but they were in their early love phase here. Plus, I love Kristin Davis, and she was adorable as Nadine. Jack’s working at Out TV at this point, and Karen works as his assistant which goes exactly as everyone would imagine it would.

Favorite Line: “You will NEVER have him.”

The gang attends the Sound of Music sing-along. Will ends up at the wrong theater and meets Taye Diggs (and honestly, I’ve seen this show so many times, I cannot remember his character’s name…I just always call him Taye Diggs…JAMES! His name is James. *whew*). Karen gets everyone in trouble when she throws her flask off the balcony and hits someone. The plot begins to (very loosely) mirror the end of The Sound of Music.

Favorite Line: “If this isn’t the theater showing Memoirs of a Geisha, then why are all these people coming out going ‘eh?’?”

Okay! That’s ten. I could keep going… I feel like both live episodes (in Season 8) deserve honorable mentions, as do the amazing episodes featuring awesome guest stars, including Neil Patrick Harris and Britney Spears and Cher (twice!). There are also some amazing holiday episodes, but I think this year I might do a Thanksgiving episode list of favorites, and some of them will probably show up on there (it can’t ALL be Friends episodes…).

If you’re a Will & Grace fan, which episodes are your favorite? Do any of these make your list?